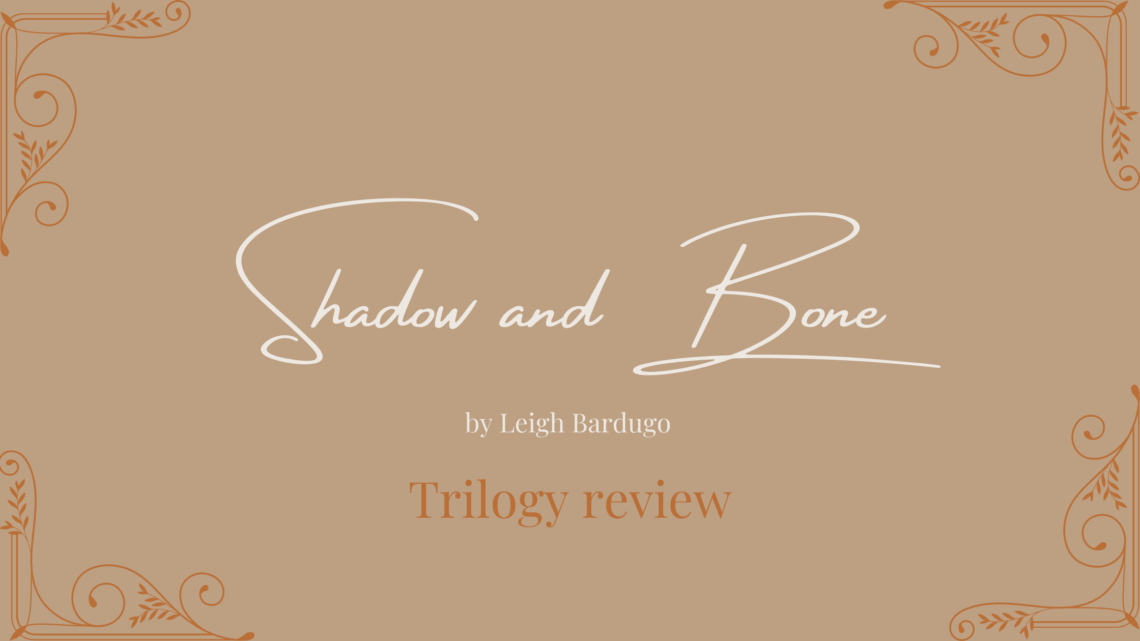 Hello, my little bookworms! here I am again and today we’ll talk about the very acclaimed-soon-to-be-a-Netflix-show fantasy trilogy… The Shadow and Bone by Leigh Bardugo!!!!

First of all, I’m going to say that I’m very excited about the upcoming show even though I didn’t find the trilogy that good. Of course, my excitement it’s absolutely and utterly because of the plot…

…well, the cast it’s not that bad either.

So, this trilogy was on my TBR for quite a long time. It was quite hyped over bookstagram. Hence, I wanted to read it and see if it was as good as everyone said.

Just then, a friend invited me to a Grishaverse read-along, of course, I joined. I have to say I consider myself a kinda fast reader so I read the trilogy in like 4 days🙊 BUT, the books ARE quite short and easy-to-read. So, it wasn’t like a heavy task. So, if you want to read them before the show you can totally do it!

First, I’ll do an overall blurb of the books for those who haven’t read them. If you already read them, you can skip this. And below that, I’ll do a simple spoiler-free review of each book. And then, I’ll talk a little with spoilers.

The trilogy goes like this: Shadow and Bone, Seige and Storm, and Ruin and Rising. This whole series takes place in a fantasy world that can be a bit confusing at first but hey! it’s a non-existent world! of course, it’ll be a tad weird at first. I actually liked the world very much although it had some holes, but it was very interesting!

This world has several countries but pretty much everything takes place in Ravka. This country has a monarchy who are humans but the King’s right hand is The Darkling (you might want to remember him, he’s kinda important) who is Grisha (hence Grisha + universe= Grishaverse ) These Grisha people are like humans but with different kinds of powers. BUT The Darkling and his power are unique that’s why he’s kinda the king of the Grisha.

The three books are told from the MC’s POV whose name is Alina. And here’s the first thing I didn’t like much about the trilogy. I found her POV a tad boring at times. I’d have loved to read from other characters’ POV.

So Alina is an orphan girl who can’t remember her parents or anything from her childhood before coming to an orphanage where she becomes friends with Mal (you might want to remember him too. He comes up a couple of times)

Mal is this super gorgeous, intelligent, funny, kind boy. And Alina is this scrawny, talentless, average smart girl who’s always a bit afraid. BUT they’re best friends. And when Mal it’s about to die at the hands of this weird monsters named Volcra, Alina suddenly burst into a blinding light that scares the Volcra away, and everyone is shocked. And so, they take her to The Darkling ’cause apparently she has a power but nobody knows how can this be as she’s human. And so the story begins!

Shadow and Bone 3.75⭐ I liked the world-building quite a lot. I liked the Grisha, most of the characters, and the plot. BUT the writing in the first book was not very good. However, it got better in the other books. And the romance was the most disappointing thing of this book by far. I wouldn’t even call it that. It was bland and boring. And, at first, I thought it was because it’s a YA book, but nope. There are other fantasy YA with great romances like The Cruel Prince, The Selection and Throne of Glass. This book just had a bad romance.

And look, yes, I’m a huge romance books fan BUT if the book doesn’t have romance, I’m totally ok with it. However, IF you put a little romance there, you have to make it good and Leigh didn’t. sorry.

Siege and Storm 3⭐ (barely 3) The second book was the worst of the trilogy by far. It was so slow! It got a bit better in the last 60ish pages. Seige and Storms was such a disappointment. The characters that made the story interesting were barely present. The only good thing is that we meet an amazing character that refreshes things quite a lot but not enough to make the book good. (don’t get me wrong I loved him but he’s just ONE character, the book needs more to be good)

Ruin and Rising 4⭐ The third book was the best one in the series. I actually enjoyed this book! I don’t know if it was because my bar was too low after S&S or what. But I’d like to believe the book was actually good. Here the story developed a lot AND THE ROMANCE! yes, believe it or not. Ok don’t get too excited, it wasn’t that good but it improved. There were also some very good plot twists and the ending was quite round.

Now I’ll talk a little bit with spoilers so STOP READING IF YOU HAVEN’T READ THE BOOKS!!!!!!

Ok. so first of all, my favourite characters were The Darkling and Nikolai. In my opinion, they were the only ones who made the story interesting. OK maybe Baghara, Zoya, and Genya, too. But they’re so secondary that you can barely connect with them.

As for Alina, I really liked her in the beginning. I found her relatable and her actions were funny. Like when she arrived at the Little Palace and she said, and I quote: “When I saw all the stairs, I almost broke down and wept. Maybe I’ll just ask if I can stay down here in the middle of the hall” (Shadow and Bone, chapter 5)

I FEEL YOU SIS! like that’s totally something I’d think! And I was really happy because I liked the MC. However, the rest of the book she was just meh, I found her a little boring, to be honest. In the second book, she was a tad infuriating. She was such a drama queen! but not the kind of drama you like. She was just annoying. In the third book, she was a bit better. I really liked her with white hair. It gave her a bit more character.

And now…WHAT THE HECK MAL?! Seriously, this was the character I liked THE LEAST! So I kinda liked him in S&B but I absolutely detested him in S&S. He was SOOOOOO annoying! always playing the victim in front of Alina blaming her for his unhappiness. Like if she should be thankful to him for loving her and staying with her??

And his character is SO bland! the only good thing about him is that he can track. Just that. And yes, that he’s the third amplifier. But we don’t know that UNTIL THE SECOND PART OF THE THIRD BOOK!!!!!!

I feel like Leah realized her hero had nothing to contribute to the story (aside from being a boulder on Alina’s path) that she decided to make him the third amplifier. ‘Cause maybe somehow that way it’d make more sense for them to stay together.

And now the romance. The thing I liked THE LEAST about this trilogy. So I liked that Leigh played with us making us believe that Alina could stay with The Darkling, Mal, and Nikolai. But it was just so poorly written. It felt like not even the author knew where the love story was heading.

Just, please, read this with me:

“I’m not sure”, he said. “I think she was a Tidemaker. No one around here is old enough to remember” He looked down at me. The cold air had put a flush in his cheeks, and the lamplight shone in his grey eyes. “Alina, if I tell you that I still believe we can find the stag, would you think I’m mad?” “why would you care what I think?” He looked genuinely baffled. “I don’t know” he said. “But I do.” And then he kissed me (Shadow and Bone chapter 13)

When I read this I LAUGHED! OUT LOUD. I was like umm WHAT THE HECK?! don’t get me wrong. I love The Darkling and I wanted this to happen BUT what the heck the writing and THAT transition?!

I know later on it makes a little more sense, but nope. Just not enough. The romance as a whole in this series was so bland, unexciting and boring. It didn’t move me a bit.

However, I think the ending was very round. I know many people hated the ending, but I actually liked it. Though I have to stay it sucked a little that Alina lost her power but I get it and I think it was really lovely what she and Mal did after the war. And even though I don’t like them together, I understand that he is the one she always loved and that they stayed together. She couldn’t have stayed with The Darkling ’cause it was like her enemy? and it made absolutely no sense for her to stay with Nikolai. Neither romantically loved each other, so it’d have been painful for both sides.

So those are pretty much my thoughts on this famous trilogy. I really wanted to like it but… well… I’m excited about the show nonetheless. I might like it more 🙊

I’m sorry. I know this review was enormous and if you’re still with me. Thank you for hearing (or reading) my ranting. I love you.

Tell me, have you read this trilogy? How did you like it? Who do you ship Alina with? 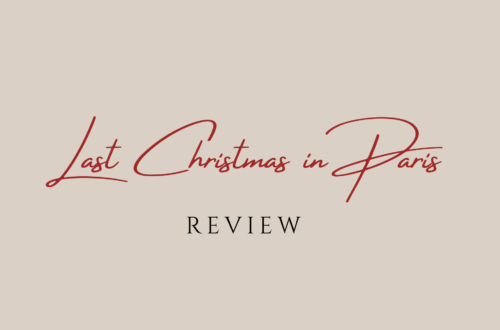 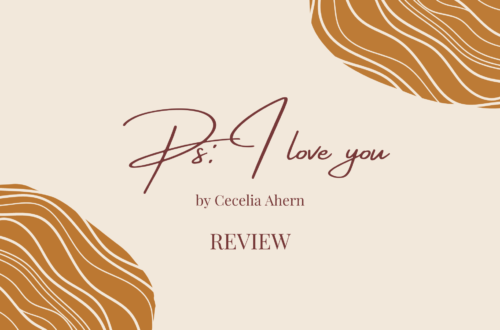 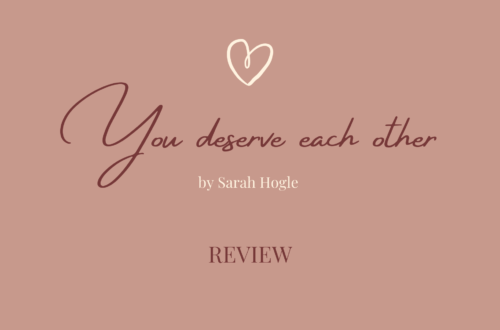 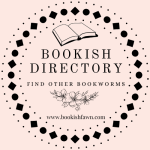